The dramatic changes that have transformed the oilfield in recent times are the subject of a recent cover story in Permian Basin Oil and Gas Magazine. Integrity Wireline, based in Abilene, Texas, was discussed prominently in the article, which examined the ongoing revolution in completion technology and wireline’s part in it.

Integrity Wireline management spoke to the magazine about their business’s own operations, but also about changes in the field in general. 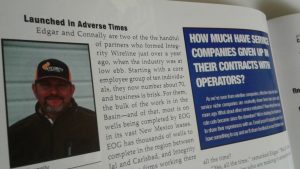 As the magazine reported, “In the wireline industry, in general, technology is changing every day. And that has been the biggest observable trend for this sector.

According to the partners who manage this fast-rising outfit, everything is going to computer-based information. “A lot of the engineers [wireline operators are now called engineers, and the riggers (ground help) are now called operators] for the newer companies are younger guys. They are guys that some people call Millennials,” they said. “There are other terms. Some people call them the ‘Google Groups.’ But it’s come to where, instead of making a phone call and saying ‘Hey, this is what happened,’ instead you write out this big long report. It’s email or flash drives. And that goes anywhere from wireline trucks, to crane trucks, to frac, to coiled tubing. All the technologies. It’s getting incredible. A lot of frac companies, back in the day, would have wires running everywhere. A lot of the frac companies now, everything’s wireless. Technology is the biggest change.’”

As the report indicated, wireline’s versatility, at least the way it is employed in the booming Permian Basin, is at an all-time high.

“The kind of magic they can perform downhole is mind-boggling,” the article stated. “The magnitude of the downhole gunnery is, well, explosive. And the levels of sophistication they are called upon to achieve, as well as the assurances and guarantees they are asked to make (and that they keep), is greater than ever.”

Frac designs are getting more aggressive, and so costs have risen accordingly on the fracs. Operators want to get as much done on one run as possible. Asked if the oil business is fully back to work in the exploration end, after have endured the downturn of 2014-2016, Kelly Connally, CEO and President at Integrity, told the magazine, “Not yet.”

Having the Right People is Everything

Another important factor impacting everyone in the patch is… people. That’s always been important—and in fact has always been the most important consideration for any company doing business there. Today, hiring is back on the upswing and competition for good employees again at fever pitch. So getting and keeping the right people is paramount.

And selling one’s people, once you have them trained and in place, is important as well. For a wireline company, your people are what you’re selling.

Integrity, like other wireline companies, does considerable training of its crews. Much of that training is safety-related.

Connally said they are currently looking for engineers and operators. Especially in this half of the year (2017), with activity out there set to “explode.”

Integrity has been adding a fourth crew member to its trucks. The idea there is have an extra hand on the ground, learning the ropes, even though the crew normally would be fine with a team of three.

Integrity’s work schedule is 14 days on and 7 days off. Some companies do a 10 and a 5. Some do a 21 and 7. But a 21 and 7—that’s only being home a quarter of the year. Integrity’s management says they don’t think that’s enough.

And a Note on TCP

It’s called TCP. Tubing Conveyed Perforating. And it’s one of the bigger trends happening in the world of wireline.

Rather, it is happening in the wireline community. But TCP is, strictly speaking, not a job done using a wireline truck at all. Rather, it is a job done by wireline crew members.They handle the job with just a pickup truck and an array of perforating gun equipment.

That’s because tubing conveyed perforating is not placed downhole using a wire line. It’s placed downhole on the end of a string of coiled tubing that is itself pushed downhole. And from there the guns are fired in sequence as the tubing is gradually retrieved from the borehole.

Tubing conveyed perforating has picked up tremendously for Integrity, the magazine reported. One source said, “It’s almost like having another wireline truck.”